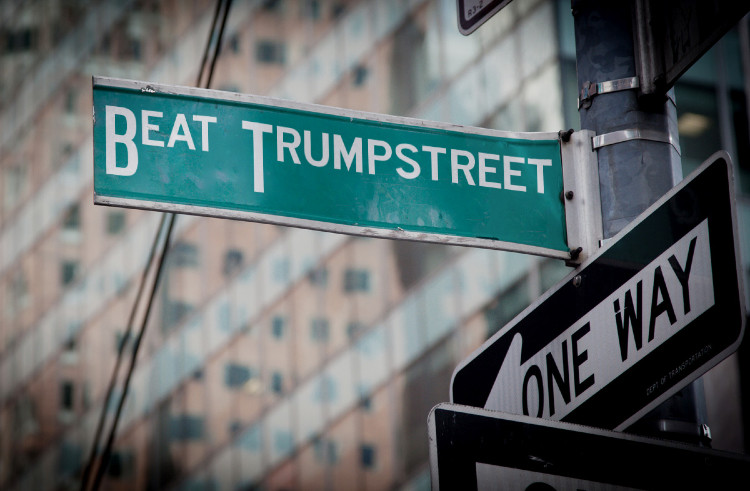 “[B]reaking up all the ordered surfaces and all the planes with which we are accustomed to tame the wild profusion of existing things, and continuing long afterwards to disturb and threaten with collapse our age…”

During this too long Democratic presidential campaign season, we will be talking about immigration and the inhumane confinement of immigrants, asylum “reform,” restructuring capitalism, Medicare for all, who’s enjoying economic advance, free college education, the LGBTQ community’s rights, what to do about Iran and North Korea, alternative energy, Jared Kushner’s “pay the Palestinians off” peace plan, reparations to African Americans, whether to break up Big Tech, guaranteed minimum income, Congress vs. Trump, impeachment, and in the week before the election so what hashtags and videos go viral.

What we won’t talk about is what’s been increasingly on display since Trump became president. He stands before tanks, alongside military leaders, under a sky filled with jets performing at his command. He’s been on his way to autocratic rule and the Congress has been pitiable in its efforts to stop him. They can’t exert enough power to see his tax forms or get their subpoenas to be respected. It didn’t take much to show us the great fragility, the great vulnerability of our tri-partite, Constitutional based checks and balances democratic republic.

It only took one man who respects nothing but his own will to blow through long established respected informalities, customs and traditions, ways of communicating and behaving that only stood because we wanted them to stand. We now have a president who is, with each defiant tweet, showing us that it’s not the Emperor who has no clothes but our presumed, inviolable, not merely informal but rather legislated order of things.

This president has no such interest in preserving anything he can smack out of his way. His first assault was against any representation of truth and reality that was not his own representation. Those, like the free press, Federal judges, and the House of Representatives, offering a challenge had to be ridiculed, exposed as purveyors of fake news, and brashly denied any authority. The “wild profusion” that a charlatan needs to avoid exposure is now upon us. Consider that alternative facts are announced as having authority, and truth, we are told, isn’t truth, idiocy that has been absorbed as constructive memes.

Followers now merge with the President as the Magister Ludi, achieving a Oneness of identity. How do you beat this? How does one election vacate what continues “long afterwards to disturb and threaten with collapse our age. . .”

We are post-truth now, a development that precedes Trump but which we all share. But we are also divided between those who are post any truth the President doesn’t accept as truth and those fumbling to hold on to or even find the certain determinacy of that old time, evidentiary Truth, the “ordered surfaces” we cannot seem to recreate. So many don’t want to be post-truth, but it happened.

What we won’t talk about is the growing fear that our exceptional, longest running democracy was always so only in the way houses of straw and twigs seemed good enough but in fact would always fall if the wolf came along. Trump has come along and taken possession of the Justice Department, the Attorney General, the Supreme Court, the Senate, the Republican Party and now this Fourth of July is showing us all that the military is his as well. And we cannot leave off the fact that he owns the minds and hearts of some 45 million Americans who would continue to support him if he went out and randomly shot someone in the street.

We see that Everyday Americans, to use Hillary’s euphemism, have a thin, weak understanding of politics in America, a disinterest bred by decades of middle-class contentment and the invisibility of the suffering on the margins. Not enough political acumen was shaped in American education to enable enough voters in 2016 to see through the masquerade of a bullshitter wanting to be president.

But alongside this, we must recognize that America itself has a thin, weak hold on defending itself from the rampaging of that same bullshitter as autocrat, that the defenses and inherited structures of our constitutional republic can be rolled over like a panzer division through France.

Right now, about half the population is looking for salvation in a Democratic presidential candidate who can beat Trump. This is reminiscent of expecting Mueller to deliver the country from Trump, like a one-shot immunization. We see now that we can’t even immunize ourselves from measles, no less a mad president.

The President’s campaign to take the Iron Throne of lifetime rule is in your face obvious, not cleverly sly, not masterfully Iago but nevertheless we seem to have no challenge, no defense as direct and forceful as a Trump tweet. Getting on that battlefield in the first place was a mistake because it’s a field in which the long, discursive response that is required to explicate the complexities that have brought Trump to the presidency and are needed to extricate him – all this, like a long, periodic sentence – can no longer be tolerated. Not only have we lost sight of what establishes truth, but we have lost the attentiveness necessary to deal with the “wild profusion of existing things.”

There is now no communicative space within which the complexities of the “conditions on the ground” determining how and what we can think can be communicated. In the place of this what we focus on is a one individual solution, a version of a classic realist battle between good guy and bad guy, a fatal solution at a time and place where we can have no consensus as to what is good, bad, true, false, real, hyperreal.

Perhaps if Joe Biden makes it through the primary gauntlet, beaten up but still standing, we can expect President Trump will go after him like Jake La Motta in the 13th round. Perhaps Mayor Pete or Kamala Harris will convince the un-meritocratic populace that they speak the language of the Everyday American; or Warren or Bernie can convince the 35% moderates in the country that it’s too late for moderation, that a mass psyche that felt an ACA public option was a bridge too far, that loves the signifier “private” and cringes at the signifier “public” was ready for a Federally run health care system.

While we are focused on a one individual, super hero to replace the mad King, a web of complexity that has no one agent solution persists.

For instance, the fact remains that if the Democrats do not take the Senate but win the presidency, Mitch McConnell will do to President Buttigieg-Harris-Warren-Sanders what he did to Obama.

What President Democrat Super Hero will do with the disciples of Trump who, most likely under tweet direction from an ousted Trump will do everything but what President Pete quantitatively and qualitatively analyzes should be done.

What their response will be to President Warren’s new IRS investigating unit trying to find out how many yachts, Picassos, Lamborghini and precious stones the wealthy have so a wealth tax can be imposed on them stretches the imagination. This is a president who would punish you for having more than the other guy? Is that American?

Whatever President Sanders restructuring of capitalism turns out to be it won’t be tweeted as a victory for personal freedom but something like the breadline socialism implanted in the American mass knowing.

President Biden is least likely to upset the Trumpians, Wall Street or the Midwest but treading water from 2020-24 is a stupid strategy to adopt as flood waters rise.

Regardless of how all that may play out, it may not be “Grim Reaper” Mitch McConnell or the Trumpians or The Squad that President-elect Democrat must deal with but the self-appointed life time president, Donald J. Trump.

There are fifty ways to leave your lover but also fifty ways Donald J. Trump can throw the results of a 2020 election into a churner that will make the 2000 Florida chad fiasco look like a well-ordered July fourth picnic.

All it takes is a will to turn election results upside down and we now have both the man and the times in which that can be done, we have the man and the conditions to continue “long afterwards to disturb and threaten with collapse our age. . .”