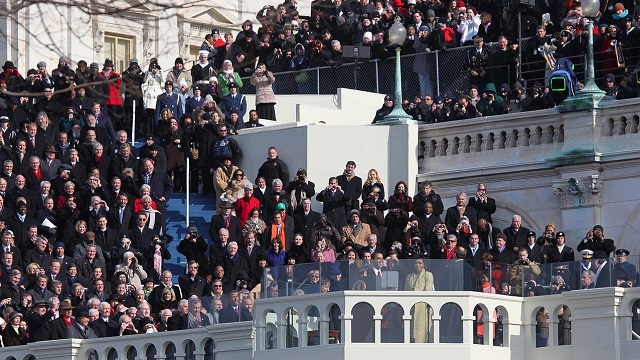 If Occupy Wall Street is correct, this election should be a shoe-in for President Obama: 1% opposed by 99%.

No one expects that to be the case. What we expect will be more like the chad-counting, voter fraud allegations, all-the-way-the-Supreme-Court 2000 sort of Presidential election. And because that fiasco of an election return has prepped and rehearsed us all, the 2012 election response will be an experienced one, one in which folks are not sitting around to see this election taken from them. In other words, there’s a greater chance that it will play out dramatically and loudly in the streets than in a courtroom or a chad counting backroom.

Mitt Romney’s 47% figure is a more reliable starting point than what OWS assumes. We just need to switch “will vote for Obama” to “will not vote at all.” Over 60% of the electorate turned out to vote in the `60, `64, and `68 presidential elections. Since 1972, no presidential election has drawn more than 56.8% and that was in 2008 with Obama’s victory. Charisma and celebrity made that election and exception. The percentage not voting of those eligible to vote ranges from 43.2% to 51.9% so we can say that Romney’s 47% is a fair average of those who can vote but don’t.

These are the same folks in that bottom two quintiles referred to in wealth gap statistics, the 120 -150 million or so whose wealth is equaled by the 400 wealthiest Americans. Neither Romney nor Obama bother addressing this group because they don’t vote, more of a stain on the Democrats who are ideologically set on governmental intervening on behalf of this demographic than the Republicans whose concern extends no further than preserving the equal voting field of “one person, one vote.” These folks can vote and if they don’t, they need to accept the consequences of that, that is, assume a personal responsibility.

So we begin with at least 40% at the wealth bottom who do not vote. At the top we certainly do have the 1% who we can expect will vote for a “wealth-protective” ticket, and this has attached them to the Republican Party and its “no tax” pledge that Republican candidates swear to.

Some 20% of the population has 93% of the wealth, while the bottom 80% has 7%. That top 20%, a professional class which serves the top 1% as lawyers, brokers, hedge fund managers, doctors, psychiatrists, accountants, financial advisors, architects, bankers and so on can also be expected to vote a “wealth-protective” no new taxes ticket.

Obama wants to tax this over $250,000 a year income group, which includes two married professionals, what Christopher Lasch called “assortative” mating, as well as small business owners, only 3% of which make a profit over $250,000. That 3% has about half of the gross income of all small businesses combined so that while 97% would not be affected by Obama’s tax plan, the overall profit of small businesses would be diminished. Obama insists that the 3% who are taxed don’t represent our idea of a struggling family business. Donald Trump fits into this 3% category and he’s not struggling is the image Obama presents.
If we subtract the 40% of the bottom who do not vote from the bottom 80% who have only 7% of the overall wealth, we stand with 40%. If economics was the sole criterion upon which one voted, this 40% would not vote to protect wealth but rather to garner whatever governmental assistance they could, from unemployment insurance and the minimum wage to Medicaid, Medicare and social Security, none of which are needed by the top 20%.

40% versus 20% should not result in a close election. However, a skin tight close election is what we have had and we continue to expect. Why? What erodes the 40%? Which groups are attracted to the Right, though the Right wishes them only good luck in starting a business? Why would any of this group be drawn to politicians who, if George W. Bush had been successful in privatizing Social Security, would have lost their wealth in the 2008 Great Recession?

Randomly listed:
Assortative mating and the combination of two middle class salaries: a husband who makes $50,000 a year is married to a woman who makes $50,000, neither are professionals but they have the surplus income to uphold a lifestyle quite different than the bottom 40%. They are more appalled by the way the “underclass” lives and carries on — as seen on Reality TV — than are the tope 20% whose contact with the “underclass” is limited to nanny, gardener, cook, and masseuse. This group no longer sees itself as “working class” or even perhaps middle class. Most interesting is the result of a male prof marrying a female prof thus raising income to top 20% level and tempering as a result what the Right has called the radicalism of the classroom. Gramsci’s “intellectual workers” of the past are now collecting stock dividends.

Small business owners who would not be taxed by Obama: This group feels itself besieged by government regulations and demands and exhibits a very pronounced “I Started This Business” attitude. Government aid was not required, only hard work, long hours and an entrepreneurial will to succeed. Obama is seen as hostile to capitalist enterprise as is the entire Democratic party.

Libertarians and Tea Party anti-government adherents: Although the ideology here is clearly on the Right, these two groups pull strongly from folks whose economic well-being lies elsewhere. They are drawn, however, to the belief that the Democrats stand for governmental intrusion into personal liberty while the Republicans want the government to just get out of the way and let the market rule. It’s possible to find here those without health insurance, jobs, or pensions and who might be depending on unemployment checks, foods stamps and other governmental assistance.

Social issues advocates: Abortion, gun control, and gay marriage are at the top of the list here as issues which antagonize those not in the top 20% to vote as if they were. Bigotry, racism, religious intolerance, homophobia, misogyny are the dark side of the appeal here.

Undecided voters: Why are they undecided when two factions are violently in opposition? Most likely reason, they are basically uninformed and don’t pay much attention to politics because 1. It doesn’t matter in their personal life, i.e. neither candidate pays their bills; 2. It’s a dirty business and all politicians are crooked and so on; 3. There’s no difference between political ideologies. This group will be persuaded by the loudest and most repetitive ads, especially by the negative ones. So the candidate with the most money support will win them over. This group may also act from pride of their independence, their personal freedom from something as social and public as politics. You can expect that any appeal to their personal freedom to choose and the danger government poses to that freedom will be a winning appeal. You can also expect that messages repeated loudly and paid for by super-PACS unleashed by Citizens United will take hold when there are no prepared defenses or informed skepticism.

Young Voters: While Obama offers some help with college financial aid as well as health care which allows them to stay on their family’s insurance until age 26, Romney advises students “to get a loan from your parents.” Nevertheless, Gen Y is not likely to come out to vote in the numbers they did in 2008. They are disappointed that Obama didn’t change Washington and replace the “same old same old” offline politics with something more like online government and politics as a personal Facebook photo or a 140 character tweet. There could be an app for politics and elections on a Smartphone. And the celebrity charisma of Obama is old, over and adios for this demographic. Because OWS naively describes a 99% vs. 1% and Obama has spent his first term in conciliating the 1%, he may seem as wrongly allied as Romney. If good paying jobs was and is a goal for OWS, Romney’s promise “to grow the economy” and create jobs may seem as plausible as Obama’s, or more so.

Disgusted Leftists: This is a group who were angered by much that Obama did and didn’t do, from extending the Bush tax cuts to not pursuing Justice Department cases involving the 2008 Great Recession. Leftists may feel closer to tackling a runaway capitalism by putting Romney in the White House for eight years, thus pushing the middle class closer to the activism shown by OWS. Leftists might feel then to be in a better position to launch a Leftist third party candidate and distinguish once and for all the difference between Leftist and Liberal ideologies.

Summary: We can say that close to 20% of the 40%, whose self-interests would be served by government intervention in the “Let Markets Rule” mantra, would benefit from the Affordable Care Act, unemployment insurance, minimum wage, Medicaid, Medicare, Social Security, the EPA, FDA, SEC and more, have and may again vote against those interests.
What remains then is a top 20% who do not fluctuate in their voting vs. about 20% who, at best, are not in the soft categories listed above. There is then not only a fight for 7% undecided but a fight for the 20% profiled above who are “in play,” meaning that unlike the bottom 40%, they will turn up to vote.
What results is a nail biting election. There is reason to believe because Liberal ideology continues to be softened and preempted by a Conservatism initiated by Reagan, that this 2012 election will result in a more strenuously and bitterly embattled drama in the days — weeks, months? — following the election returns.