In Which We All Have Parts

“Novation”. the title of the new Fringe episode, is an obsolete word for “innovation”. to make something new or to renew. It’s an apt word for Fringe, because this is a series that has renews itself regularly, this season by removing Peter Bishop’s (Joshua Jackson) identity and making him a stranger to all but himself. This is a kind of archetypal nightmare touch: you return to father and lover and they don’t know you; no one knows you. 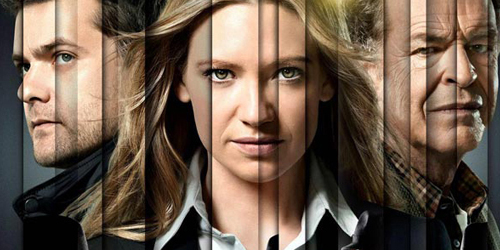 Identity has already been established in Fringe as a threading theme: when an alternate universe and characters alternate to the characters we know “Over Here” appear, the profound and perennial issue of whether we are self-creating or fashioned by time and place – by the universe we’re in—emerges. In other words, Oprah and “The Secret”—personal choice and will shape reality—or, Karl Marx and the determining powers of the historical, material and objective conditions of existence. In any universe.

“Novation” makes its own contribution to the identity theme. Dr. Malcolm Truss (Arye Gross) is an “innovative” cellular replication scientist whose work had been terminated by William Bell (Leonard Nimoy), who intoned an admonition familiar to all familiar with the moral debate surrounding cloning and stem cell research: “Some things are not ours to tamper with. Some things are God’s.”

The shapeshifters make this question of possession more complicated. In seeing them, we can say that we continue to face the identity of science, now not so much pure science, but cybertech, renewed through innovation without any moral or social critique. Technological innovation is greeted “Over Here” and “Over There” as yet another visitation of Prometheus with the fire we all need. Ironically, our own identities have been much affected by high tech innovation and it has become the life’s blood of much, including globalized financing and its unquestioned pursuits.
Technologies help Broyles (Lance Reddick) and the Fringe team to see the shapeshifters, who appear to humans to be perfect infiltrators, the perfect terrorists, if you will. Their perfection lies in their ability to replace anyone. In a post-9/11 America, the fear of lost control—of identity, of exceptionalism—is layered within other fears too, of global competitiveness (read “China”) or perhaps of an alternative universe, where there resides that better selves we all could have been.

In “Novation”, Fringe raises another fear, of loss. The Peter/Olivia romance, rocked by the Olivialternate/Peter romance, then retrieved, is now confounded by Peter’s new anonymity. Olivia has been dreaming of a face that she now sees is Peter’s, but she has no memory of him, no memory of love. That love needs to be renewed; Peter needs to be newly identified, re-innovated.

Fringe has built in mechanisms of replenishment, one being this opening up of every character to an alternative universe version. The effects of such other selves aren’t predictable. Last season’s red haired Olivialalternate contrasted with our “Over Here” Olivia in refreshing ways. Our Olivia expresses a renewed look at her own identity and Olivia as a central character is centered in a new surround. Walter, however, does not need refreshment from Walternate, as he is self-renewed by his own zany mixture of enthusiastic child, addled genius, loving father, hero to the rescue, and ‘60s countercultural remnant. In “Novation”, Walter’s quirky human dimension grounds us in a familiar dimension, because we have come to recognize such quirkiness as intrinsic in the “human comedy” production in which we all have parts.

The Walter scenes remind us also of Twin Peaks, where “You’re Only a Stranger There Once”, but the strange mixes with the everyday soap opera, the lunatic mixes with the staid, family life. When Nina Sharp (Blair Brown) visits Walter in his home lab, which has housed a milk cow, she recognizes he is upset because he’s making fudge, a favorite of Peter’s. Agent Cooper’s cherry pie has become Walter’s fudge. David Lynch’s TV is transformed in our conservative and paranoic times into the hokeyness of Dancing with the Stars, the schadenfreude provided by Loser TV, and the bourgie consolations of endless foodie, chat, and late night TV.

Amid this shifting, “Novatus” returns to another motif that, like the romantic “elective affinities” magnetizing Olivia and Peter, enriches the human dimension of a show on the fringe of what we know. Call this the Father/Son Archetype: a lost son seeking a father’s recognition.

Peter’s composure and rationality in trying to get Walter to recognize him create two charged scenes in the “Novatus” episode. Walter is going deeper into a rabbit hole of his own tortured mind now that yet another Peter has appeared and needs to be identified. “No!” Peter protests, as Walter’s mind goes off in an “I need to suffer” path. Without Peter’s presence, Walter is barely holding on to his sanity. His recuperation is Peter, the real Peter. And this need of father for son, son for father replenishes the show’s human, real world credentials, credentials TV seems to be losing.

Fringe is outside the neighborhood of The Real Housewives of Orange County, The Real Housewives of New Jersey, and The Real Housewives of Atlanta, much as Edward Scissorhands’ castle was outside Main Street America. As Fringe revives itself, it avoids the pitfalls of devouring itself like the snake eating its own tail (as did The X-Files, in its increasing obsessions with the labyrinth of its own plot). Instead, Fringe conjures a postmodern space that invigorates classic realism.