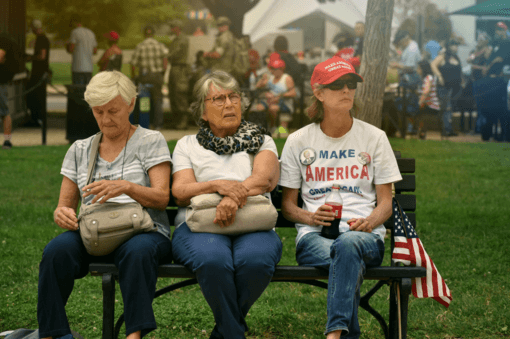 “Imagine it is the spring of 2019. A bottom-feeding website, perhaps tied to Russia, “surfaces” video…”

“Facebook appeals to your lizard brain — primarily fear and anger…And with smart phones, they’ve got you for every waking moment.”

“He was loved among those who hate,” Charles M. Blow writes in an op-ed piece for The New York Times in the same issue in which the above quotes appear. The “he” is Donald Trump, who “was working-class white America’s rebuff to an erudite black man and a supremely experienced woman.”

Our deep registry of historical memory reveals that American voters have never found any sort of erudite candidate appealing. The first election I recall between Eisenhower and Adlai Stevenson imprinted this exchange: “Governor Stevenson, you have the vote of all the thinking people,” to which he replied, “That’s not enough, madam. I need a majority.”

As far as Hillary’s credentials as “an supremely experienced woman” are concerned, we need to admit that what matters is the kind and quality of that experience. Hillary’s experience alongside Bill Clinton and then alongside Barack Obama falls easily into a virulent mosh pit of opposing tweets and snapchats. Here, experience as a credential is not greeted by universal recognition or appreciation.

President Trump admits that he is supremely experienced in grabbing pussy while Bill Clinton was more politic, recognizing apparently that such behavior was not presidential. Trump is not so confined by any opinion of his behavior.

We are all so confined now within our own self-authorized bubbles of personal judgment, perhaps defensively because to admit voices from the outside to enter seems like truly opening Pandora’s Box of chaos and madness.

When we were not barraged with the discord that cyberspace presents us, we had only to deal with off-line voices, which had a range limited by the analog networks unable to tap us into a second by second update of an American mass psyche. We are now treated to such in our online dimension of reality. Here, bottom feeders with low information opinionate on a bottom ceaselessly descending toward a dark abyss where we can no longer see each other.

We have greeted this descent as the new alternative reality that cyberspace offers, its capacity to strengthen our social bonds, its democratization of public discourse, and its displacement of the offline world, i.e. “The Great Outdoors,” as notable advances in personal, societal and planetary well-being.

What our online cybertech has made possible is a globalizing facility of a plutocratic creating economic system in which money, labor, and product now float across all previous boundaries. This is rather like facilitating the advance of an invading army, or facilitating the spread of a virus.

Perhaps those who voted for Trump and who won’t leave his side admire the fact that he heroically flaunts his own personal autonomy, indifferent to any challenges, as do they. He’s an avatar of those who have also dismissed any authority but their own, those who are now angered by false impositions of authority which tread them underfoot.

What indeed does a deep historical register show us but a steady advance of discourse, practices and institutions, all representing power to be respected and obeyed, that have led to three men owning more wealth than 50% of the population and even more of that population riddled with insecurities, anxieties, fears and a cultural paranoia that drifts from alien invasion to nuclear war, identity theft, opioids, viruses, school shootings, terrorist attacks and endless others.

This seems to be a counter-intuitive statement to make in our so called Information Society and the ready to hand access via our smart phones of information. One would think that the more information you have, the better informed you are. However, if our pursuit of information is driven by that way of knowing, namely that instantaneous answers to our questions make us critically aware and thus savvy voters, then we are unable to explain the rising attachment of voters to irrationalities and to those individuals spouting the same.

“We live in a world,” Jean Baudrillard writes in Simulacra and Simulation, “where there is more and more information, and less and less meaning.”

Comparable to the plant whose roots curve back into soft peat and not into surrounding harder soil and so weakens and fails to grow, vulnerable to insect predation, minds circling in their own opinions fail to grow and so become vulnerable to the predations of our huckster economy.

The answer to the question as to why such minds “bottom feed,” that is, prefer sex, lies and videotape to rational argument and cogent, documented exposition has much to do with what I see are three factors.

First, we now exist in a surround in which we no longer recognize the right of anyone to lead us out or to bring us to, that is, educate us, when we reserve that right to ourselves. The courtesy of listening to counters to our own thoughts has now collapsed into a disregard and an angry vituperation of counter views.

Secondly, we can now easily find in cyberspace others who confirm our own views, which may not, to the growing number of narcissists and solipsists among us, matter, but nonetheless most certainly strengthens and insures the imperviousness of our own views. There are, in short, no “bottom feeders” when the bottom is our only level.

I believe President Trump falls into the category of those who do not need any outside confirmation of what he believes to be true. He may appreciate Judge Scalia’s argument that no independent counsel outside presidential control is legal but he hardly relies on its existence to maintain his own view that he is as president is untouchable regardless of what he may do.

This illusion of invulnerability makes him fearless before any tribunal and so prompts his lawyers, free of such an illusion, to fear he will lie under oath and thus be guilty of a felony.

It remains to be seen whether it’s in Trump’s nature to lie, rather like the scorpion who stings the frog though both drown because it’s in his nature to do so,  or whether he can recognize the real danger the Mueller interrogation poses and divest himself of his seigniorial attitude and his mockery of truth.

This is a predicament all those who have set themselves as supreme arbiters of truth and meaning face.

They either must expand beyond their own knowing or remain loyal to it, their knowing contracting to a nil point. Without confrontation with other ways of knowing, what we know is little and low, our instinctual affinities, our “lizard brain,” does all the “knowing.”

Thirdly, we moved into a postmodern paradigm, one specifically tailored to meet an American fixation on individual determination. To quote Baudrillard once again, “Postmodernity is said to be a culture of fragmentary sensations, eclectic nostalgia, disposable simulacra, and promiscuous superficiality, in which the traditionally valued qualities of depth, coherence, meaning, originality, and authenticity are evacuated or dissolved amid the random swirl of empty signals.”

This preference for feeding on simulacra and not reality, superficiality and not authenticity, the fragmentary and not the coherent has not been engineered by a ludic cabal of postmodernists or post-truth-ists, but by the marketing and advertising armies of profit making.

Rather than turn us away from a clash of narratives of truth, postmodern theory turns us toward a scrutiny of these clashing narratives, searching for the conditions that make one narrative of truth hold at a certain time and place while others do not. That information incites a change in affecting conditions, moving us closer to truth stories that erase destructive truth stories.

What is said by profit in regard to the postmodern is not this. That close scrutiny of what lies outside and counters our own narratives is overwritten by profit and only the “Everything is Whatever You Choose It to Be” reading of the postmodern is presented.

The postmodern observation that reality is not imprinted in words and words are not imprinted in reality, that we always only have what we can say about reality, does not unleash us to deny reality outside our own words nor allow us to ignore the need to wade through the politics of words and find a narrative that holds, a center representing, as Robert Frost put it, “a momentary stay against confusion.”

This is not the view that has held us. What holds us is a view that we are all personally  free of any authority and self-anointed to choose truth and reality as we choose it to be.

As both our searching and our choosing are done within the world that profit making shapes to maximize its profit making; and those efforts co-opt and commodify resistance, we have become bottom feeders by design, a design, not our own, although ironically we hold it to be so.

If we bottom feed in this way, we cannot hope to achieve that level of knowing that can inoculate us against a spread of ill informed voters nor protect us against the election of another Trump type in the future.

Our recognition that we mediate our planetary surround within what we ourselves imagine and create, what we ourselves think and produce, and that this “worlding” of ours is not authorized or legitimated or supported by impermeable foundations or celestial guidance is not a fatal one nor is it new.

Giambattista Vico, in his New Science, 1725, writes that man “makes the things out of himself and becomes them by transforming himself into them.” “Such we are made of such we be,” Shakespeare reminds us, and we are made of what we ourselves have made. This awareness, however, has, for more reasons than I can here explore, become now a popular/populace awareness, one that is in the streets, one shaking everyday life and thoughts.

We can, however, educate ourselves within this awareness in ways that may release us from the impasse of opposing certitudes, each confirming the solidity of their own credentials.

It is possible to fashion a classroom that can do justice to a clash of narratives without giving up seeking to understand how a critical rod of reasoning is applied from differing reality frames.

It is possible to fashion such a classroom that gives up seeking some universally accepted universal rule of judgment but rather seeks to know the conditions out of which contesting judgments are made and so alter those conditions that are mutually beneficial, leaving what cannot be so dealt with to an inevitability of changing conditions.

Right now, the classroom of the future looms as not a classroom but a solitary young pupil exploring virtual realities that bottom feeding providers offer minds that have already been and will continue to be nurtured in this manner.

We can see the profit making from every angle.

Locked Up: Crime and Punishment in America

Broadly speaking, states with weaker gun laws see higher rates of deaths from guns, whether murders or suicides, than states with tighter laws. But it’s also true the vast majority… [...]

Optimism of the Will

What can we do about it? The only tools available, like it or not, are education and organization. There’s no other way. It means trying to revive an authentic labor… [...]

“Fat Leonard” had friends in high places. By 2017, 60 admirals were among the 440 people who have come under US judicial scrutiny. According to the official US Naval Institute’s… [...]

What does surrender look like in the world of geopolitics? To my mind, this gets pretty close: “President Biden’s national security adviser said on Sunday that the United States had… [...]