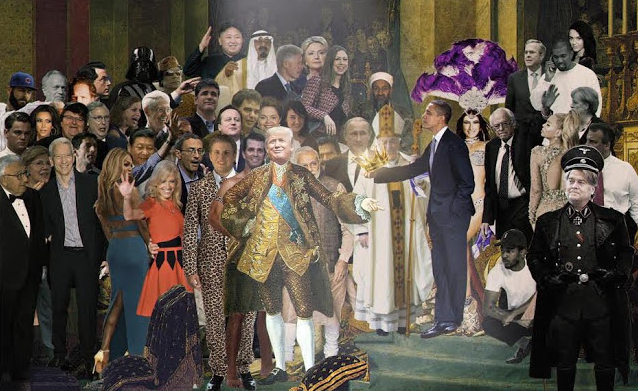 Our Narrator-in-Chief, President Donald Trump reminds us with every tweet that you can play fast ball with facts and truth and there is really no one to stop you. I would like say “Unless you’re on trial in a U.S court” but a recent viewing of The People v. O.J. Simpson, 2016, reminded me of how even the hardest of evidence can be narrated against its meaning.

Each one of us feels Constitutionally free to present our reasoning, stretching way back to when  black Africans “needed” to be enslaved and the indigenous population “needed” to be exterminated to the present and why it’s best to separate human activity from global warming and why it’s best for everyone to starve the Federal government and lower taxes on the rich in order for us all to enjoy our share of “life, liberty and the pursuit of happiness.”

You might say that there was always a hole in our representations of truth, which we now universally adopt as “narratives,” to use the terminology of postmodernists, long out of fashion except for their legacy.

Whether you trace a grand narrative change in that mass psyche back to the worldwide countercultural uprising of the `60s and `70s which as Derrida was to phrase it deconstructed a mythology of a grounding reason transparently expressed in language, or to a relentless undermining of governmental authority launched by Conservative think tanks, attitudes changed drastically.

You might say we had popularly discovered that reason and its minions facts, argument, evidence and so on, had a soft belly.

Trump the Artful Dodger instinctively recognized the unprotected soft belly of campaign discourse. You could play the electorate like a piano regardless of what the truth of anything you said might be. Refutation by fact checkers and the defensive responses of your opponents would come after and have the same impact as next day quarterbacking. This is a candidate who did not hesitate to lie because he had no fear there was a way acceptable to all that would expose his lies.

Trump the Confidence Man played all the notes that an electorate primed for years to fire up would hear as salvation and himself as their Savior. He went through a door that had already been opened in the American mass psyche. His own steady attack on the mainstream media, most especially the legacy press, taps into a suspicion already on the boil in the U.S.

We became post-truth before Trump appeared, and in that new configuration of self and world a zeitgeist/paradigm/mindset of suspicion has taken center stage. That distrust goes beyond the ranks of Trump’s followers and extends to all those who live by the wages they earn and not the dividends upon which a far smaller percentage of the population live.

Regardless of how history narrates Trump’s beginning and end as the U.S.’s most unstable and potentially dangerous president, it must record his gifts at seizing the moment and bringing himself to power. And it may record that Trump as a savior has detoured an imminent uprising of an irate populace scheduled for a quiet “creative destruction.”  This is a role he has not abandoned in the same way a confidence man does not abandon his mark.

His presidency has not fueled the anger of this irate populace in the certain way Hillary Clinton or Bernie Sanders would have. And it seems unlikely that the presidency of any of the Republicans challenging Trump would have done anything other than increase the yearning of the discarded for a Punisher Demagogue.

The Resistance formed against Trump is not to be ignored but its anger is not threatening in the way populist anger is threatening. A dimension of populist response other than the overwhelming power of its irrational attachments is its readiness to enact beyond restraint its feelings. Trump has laid down concepts that do not emerge from or build the house of reason but are stones thrown through that house’s windows. And that suits the temper of the times for all those not basting in the warmth of their stock returns.

Similar to the way “Reaganism” and his upending of the credibility of any egalitarian economics has endured though Reagan is dead, Trump will leave us with a dark legacy. I refer to Trump’s political iconoclasm, from historically respected protocols of presidential behavior to his replacement of State Department diplomacy with the disturbing erraticism of his own personality to his egomaniacal drive to replace democratic values with his own willfulness,  itself grounded in truly mindboggling ignorance, presumption and arrogance.

I believe it important to recognize that Trump, both as campaigner and president, is not stepping beyond what his followers were hoping for and were prepared to accept. That segment of Trumpians scheduled for extinction by an economics that was designed to axiomatically do so is the enduring segment. The racists, homophobes, anti-Semites, misogynists, anti-Muslim and other perennial haters, which plague every society, blossoming in ripe moments, are instruments to be played by aspiring demagogues. The U.S. has proven particularly fertile ground, which is ironic considering the multi-ethnic, racial and religious composition of the country from the very beginning. But those who are collateral damage that the present form of globalized techno-capitalism is prepared to accept will not self-eradicate. And an economics that holds eradication as a beneficial “creative destruction” out of which something better will emerge is an intractable enemy to those unwilling to oblige this economics.

Trump had rightly guessed that there were enough angry Haters and enough fearful on financialized capitalism’s Death Row to win him the presidency. Discovering that his voters were not primarily from the lowest economic strata does not mean that class had nothing to do with his victory. Incomes have been hollowed out so that a former six figure salary and a secure job reduced drastically in both salary and conditions of employment is itself  cause to be a Trumpian.

The fact that Trumpians remains inconceivable to those who enjoy far different realities is in no way any kind of deconstruction of reasons why Trump is supported nor any kind of just dismissal of those supporters. Unless an economic system that benefits only those who are totally appalled, offended and fearful of Trump and the Trumpians is drastically changed, an army of voters waiting for another savior will remain with us. We would have to disengage ourselves from the Reagan “trickle down” legacy and, deeper than that, deconstruct Adam Smith’s words where we are urged to nurture “self-love” and not our humanity, words that have left a greater indelible mark on the American mass psyche than Lincoln’s “better angels of our nature.”

Trump has given hope to those scheduled for extinction in the economic order of things but he has also given voice to the craziness of his own long coddled temperament. That display and voice is frightening to those who see his destructive potential in regard to our democratic order of things.

Those who focus their politics not on economic inequities but cultural ones also find Trump frightening. Doubtlessly, paying scant attention to such inequities allows those offended by Trump to discount their own steady stream of dividends as irrelevant in their view of Trump.

Those on Death Row within our economic order of things have reason to discount Trump’s twitter tirades and tantrums not because they lack the sensitivity of the gentrified but because they instinctively recognize that all that amounts to nothing compared to the economic resurrection Trump has promised.

Congressional Republicans also easily step around Trump’s offensive and disturbing words and behavior because they too have their eye on higher stakes. This is a president who will make their Reaganite/Ayn Randian dreams come true, a president who believes the wealthy are the successful winners who will compete in the global market and make America the winner on the game board of their choice. Government is the problem as Reagan instructed and must be gotten out of the way.

Perhaps the Ayn Rand Republicans expected to do so by starving the Federal government by starving the Treasury and so starve every entitlement program and return all of that to private profit making.  But what they have gotten in Donald Trump is a president who intends to uproot and upend that Federal government and all its agencies and is doing so by the force of his own unstoppable mania.

Does this frighten legislators operating as shills for plutocrats, such as Trump?

I do not think so because just as Angela Merkel is not fazed by a Trumpian madness that will disappear, the shills expect that the order that will be created will remain when Trump is gone. They hold that there is a resiliency to that part of the government democratic order that they wish to hold on to that Trump cannot taint.

With financialized capitalism once again cut loose from all government shackles, the fossil fuel industry profits and dividends preserved,  the taxes of corporations and the wealthy reduced to a laugh, entitlement programs brought to near bankruptcy and thus closer to privatization or repeal, military spending increased so that global business can remain secure, anti-work and union activities thwarted, and the transfer of everything once public to private control and much more, an order of things will be entrenched that Trump’s shenanigans will not have impeded.

A future that Trump’s presidency made possible, although not in the plans of any Congressional Republican, will not be harmed by the wayward excursions of his personality. Ironically, however, that future order is set up to intensify the cries for a savior among those on Death Row, for another Trump, this time one who will most certainly “make them great again.”

What Trump and the Republican Party Teach Us

A Culture of Narcissism, a Politics of Personality