Posted By: Joseph Natolion: May 11, 2019In: Politics
Print Email 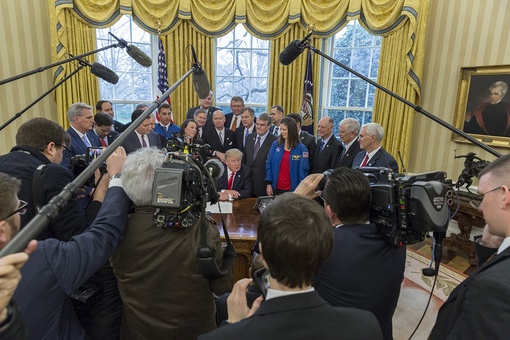 Let’s start with the polls most voiced in the social media/Twitter world: most Americans aren’t interested in the battle of the House of Representatives is making to bring all President Trump’s obstruction of justice evidence manifest in the Mueller report to light. That effort in the House to act as a justified prophylactic protection against executive abuse is, in the retweeted words of all the king’s men, driven by Democrats unwilling to accept Trump’s victory in 2016 and now unwilling to accept that “there was no collusion” and no obstruction of justice.

The fact that it was Attorney General Barr’s  conclusion that there was not any obstruction of justice although Mueller had left the matter as undecidable within the province of his jurisdiction but not undecidable within the province of the Congress has not pushed public opinion toward urging Congress to pursue the matter. Rather, public opinion has adopted Trump’s own claim to a complete exoneration of any obstruction of justice charges. The Republican controlled Senate has, not surprisingly, also adopted Trump’s own claim.

Thus, the House of Representatives is not seen as fulfilling its prophylactic protective role in democratic fashion but rather seen as grinding a grudge in Loser Democratic Party fashion. It is the Democratic Party’s House, not an unbiased one fulfilling the Constitutional requirements of the Congress.

Polls show that Republicans are interested in immigration and are finished with the Mueller report. They are not at all interested in exposing obstruction of justice charges. “Case closed” Senate Majority Leader Mitch McConnell announced. Polls show Democrats are more interested in health care than keeping the case opened. But which Democrats? The Democratic electorate on Twitter may not be the actual Democratic electorate as reported in The New York Times (April 9, 2019) but that divide has more to do with identity, diversity, political correctness and AOC’s progressive politics, the so-called “woke” Left wing, than with the threat to a Constitutional balance of powers presented by a presidency intent on eliminating all checks to executive will. It is not clear whether a Democrat electorate wants the House to go along with case closed.

What is clear is that in a culture of spin, spectacle and collapsed attention spans wandering in a cyberspace of post-truths, the House of Representatives’ efforts to keep the case open in every way possible, including subpoenas, clearly risks evidencing Trump’s own take that he is a hounded innocent.  On that issue, social media is a tower of Babel, flooding a society historically disinterested in civics, political theories and history with rabid “crushings” of antagonists, doctored viral videos, and the Mao Red Book-like tweets of President Trump.

In short, cyberspace’s social media and the world of Twitter are not the places the House of Representatives will find clear or coherent support for its balance of powers battle, though this frenzied domain is now the home of public opinion.

Without a widespread public outcry that Mueller’s evidence for obstruction of justice be pursued as evidence for impeachment, the House’s subpoenas of all the president’s men as well as the office of Attorney General will not be carried out by either office. The fate of all this is in the courts, where in a similar subpoena case then Attorney General Eric Holder was not held in contempt of court but was forced to hand over “non-privileged” documents. That same ruling would support Barr’s position of not turning over parts of the Mueller report that Barr considered privileged according to his terms of privilege.

In short, unless a “smoking gun” tape like the one that sealed Nixon’s fate is found, a “smoking gun” jump drive, and unless the dominating means of communication now — Twitter and cohorts — line up behind not only what the truth is but how to establish it, this assault on a Constitutional balance of powers is victorious.

A failure not only not impeach Trump for abuses of power from his first day in office but also not even bring the full report of those abuses into the clear light of day will embolden Trump as well as his followers who delight in his trespassing of a Deep State which is preventing Trump from making America great again. Trump’s narcissism and need for adulation, something the presidency is giving him, surely convinces him that he is the most popular president in U.S. history, the most deserving of life-time tenure. If he could by executive order repeal the Twenty-second amendment, which restricts the presidency to two terms, he surely would.

An economic recession and/or a war could pull a Republican Senate away from Trump. Both are not improbable. The image of Trump and Bolton as warfare commanders would surely freezes the brains of both Republicans and Democrats. And a recession could easily be laid at the doorstep of a president whose business acumen led him to a loss of over a billion dollars in one decade and who, as his own economic adviser, traded a globalized economy running quite nicely for the Republican Party of Dividends for his personalized tariff battle with China.

We have little idea of what Trump unbound might do. But, he, like the boy in the H.C. Anderson fairy tale who yelled — in a contemporary re-write —  “But the Congress has no enforcement power over me!” will certainly rock the fragile foundations of convention, law, reason, and judgment. Trump’s blanket refusal to respect any subpoena for himself or anyone in his sphere of influence is a kind of declaration of independence, one in which he refuses to bow to an equal branch of the government.

Trump is also unbound by our contemporary post-truth surround. Everything now goes on in the irrational frenzy of what Justin E. H. Smith in Irrationality: A History of the Dark Side of Reason, 2019, calls a “Shiva-like destroyer wherein Trump and his spokes people muddy facts and reason or endorse the infallibility of arrant bullshit. In Princeton philosopher Harry Frankfurt’s definition of bullshit, the bullshitter cares more about persuasion, like a salesman, than whether what he is saying is true or false.

We recognize Trump by this time as an accomplished huckster. Everyone who speaks up for him, parroting his words, is part of the sales team. However, not caring does not imply not knowing. Thus, one has to wonder why those minions who can distinguish truth from lies and bullshit take Trump’s part. Nixon had the same band of apologists; Kim Jong Un very quickly purged those who did not fall in line, as did Stalin before him. As historical truth, this is in fact an m.o. of all autocrats. They surround themselves with those who bend a knee. And delete those who will not.

What is new and startling here is that almost the entire Republican Party acquiesces to Trump’s nationalist, anti-global free trade, anti-transnational compacts, anti-expenditures that raise the national debt — all of which defined the Republican Party since Reagan. What is also new and startling is Trump’s defiance as a policy, one he will campaign on in 2020, of the oversight powers of the House of Representatives and the value to our now clearly exposed fragile Constitutional democracy of such oversight.

The issue is especially alarming given Trump’s autocratic rule inclination coupled with his ignorance and distaste for the functioning of a partitioning of power as a means of checks and balances. John Yoo, who wrote on behalf of torture in the Dubya administration, is, surprisingly, not on Trump’s side: “He’s treating Congress like they’re the Chinese or a local labor union working on a Trump building.” (The New York Times, May 8, 2019).

The power of both a populace swirling in an irrational frenzy and an opportunistic autocrat has been brought from latency to actuality via the Internet.

Again, Justin E.H. Smith: “The Internet has destroyed long-familiar objects: television, newspapers, musical instruments, clocks, books. It is also destroying institutions: stores, universities, banks, movie theaters, democracy.” We are prepared for technology to change things but democracy is not such a “thing.” Democracy, like Nature and the planet and our own being as humans, is analog.

All that has been required since the on-line world appeared in 1990 has been a link from it and its destruction power to the analog government in place. That link was made in the United States by Donald J. Trump. However magnificently we envision the constructive and democratizing powers of cyberspace, the fact remains that Trump unbound with a Twitter bullhorn is an eroding and not a democratizing force. Words on social media caught in a whirlwind of never ending, never resolving vituperative battle do not amount to oversight of the presidency nor check a move toward autocracy.

Trump may lose the 2020 election but thus far, no one has, in boxing lingo, laid a glove on him so there is reason to think that he will work to retweet a loss into a win. And there is no telling how much help he will get from Democrats who cannot seem to keep themselves from being crazy in regard to platforms for which too many voters are not ready.

A circular firing squad at the Democrat debates plus a defeat from the Shiva-like destroyer of cyberspace in regard to the House’s refusal to see the obstruction of justice case closed may also lead us to a blanket finish in 2020. Unless Trump is defeated soundly, without any chance of claiming fraud at the polls, a close finish puts that election in Trump territory, the “crushing” domain of social media where Democrats make apologies and Trumpians attack.

Whether or not Trump’s ardent followers reach 50% of the electorate, expanded surely by the House’s failure to win in their life and death battle with Trump and then turn into an army of Trump loyalists in the 2020 election remains to be seen.

This seems very likely if hatred against those who call Trump “a fucking moron” reach the performative stage. Trump’s in possession of both the vehicle — Twitter — and a throng of Americans who base their understanding not on voices of authority — dismissed most likely forever, of un-democratizing, coastal elitist, legacy press, long form analog voices –but what others on social media say that mimics their own personal opinions.

On the horizon since the country’s founding has always been a fear of a mobilized populace, historically apathetic in regard to politics, and thus vulnerable to the mindless tweets of an autocracy seeking plutocrat. If indeed the case is closed on the House’s attempt to bind Trump within the power arrangement Constitutionally established, then we face a Trump unbound, one we can chase after in the courts far beyond 2020 as well as on that trustworthy court of reason and resolution — Twitter.

The Story of an Island

The post The Story of an Island appeared first on CounterPunch.org. [Read More]

Roaming Charges: Leader of the Pack

Even when he’s losing, Donald Trump wins (and bigly!) every time. His secret? He knows how to tap in [Read More]

Things Said in Confidence to 4000 Close Friends This Week