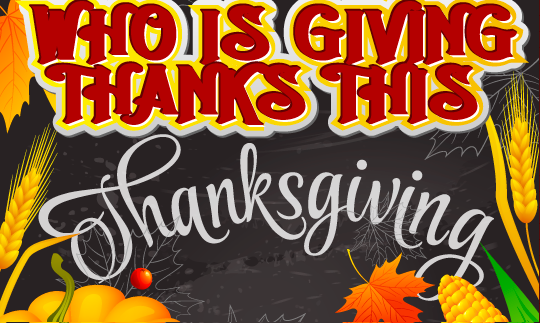 “a single event can have infinitely many interpretations.”

“disorganization is a kind of anesthesia” — Jenny Holzer, Truisms

Regardless of our political persuasions, we all make a personal review of what we are thankful. Not having very little or less than last year or less than your parents would, of course, be a cue to talk politics.

We are now more politically watchful in the same way Freud suggested that childhood no longer fades into a mostly forgotten memory for those repeatedly drawn back to it, perhaps, by the latent power of a single event. Curious and curiouser has been the capacity of the American mass psyche to remain disinterested in politics, almost oblivious to it when historical memory shows us that elective representative democracies are fragile — about as fragile as those conditions making the Earth habitable for humans.

This is a giving thanks purely connected to the election of Donald Trump as president of the United States. It’s a listing, but it creates a complex profile as each declaration opens to back stories, qualifications, extensions, deeper thoughts and questions, mystification, and, as in Jenny Holzer’s Truisms, to contradictions and the exposure of a mass psyche loaded with paradox, leaving us with a mystery comparable to the uncertainty principle in physics whereby particles are in two different places at the same time.

This is not a list of empirically validated facts, but of phenomenal perceptions that nonetheless truly and really exist. In the aftermath of the election, what seems to becoming clear is that we did not poll phenomenal perceptions, either because they were hidden, or far removed from a framing of reason and reality that preempted recognizing them. It would seem then that a part of the demos deeply inhabited our shift into a Baudrillard hyperreal while another part has remained watchdog loyal to incontrovertible fact, indisputable evidence and clear conclusions. We observed on November 9 which had the upper hand.

So, who is happy now?

The whole country is giving thanks that the election is over.

Everyone who believes it is possible to return to the middle class well-being that existed “before,” perhaps in the period 1950-1970 when the lowest quintile of the population experienced the highest raise in median income, or, perhaps before the 2008 Great Recession, in which they had not yet lost 39.1 percent of their net worth.

Those ready to rewrite history.

Everyone Hillary Clinton called “the Deplorables.”

Those now saying, “You didn’t see us or write about or reach us in your polls, but WE ARE HERE.”

All those whose wages have not risen in decades, and who work more hours for a lesser quality of life than their parents do.

The “un-gentrified” — those who lived in the neighborhoods they no longer can afford, but who believe President Trump will regain their possession.

The “gentrified” whose stock portfolios will soar thanks to the unleashing of Wild West Wall Street wheeling and dealing.

The top 10 percent who can afford private health and education.

All those on the extreme left who believe a Trump presidency is the quickest, albeit dangerous way, to implode the plutocratic order in the US.

The 50 percent of Americans whose combined wealth equals that of the 20 wealthiest Americans.

All those anxious to put Hillary Clinton in jail.

Mitch McConnell, who, after eight years, can see President Obama out of the White House.

President-Elect Donald Trump, who has done big things before, but not this big.

Sarah Palin, anxious to head the Energy Department and shut it down.

Parents who can transfer their children from poorly performing public schools to charter schools, which will outperform public schools because they are privatized, market-driven enterprises.

All those who see the victory of Donald Trump as a sign that the US’s high and rising level of wealth inequality means nothing, except to Bernie Sanders and his socialist followers.

All those who see the victory of Donald Trump as confirmation that global warming is a hoax.

All those lined up to “Drill, baby, drill” for fossil fuels.

All those seeking employment on the Dakota Access and the Keystone XL pipelines. And those who would benefit from their construction.

Wall Street bankers and brokers anxious to see the elimination of the Dodd-Frank Wall Street Reform and Consumer Protection Act, the Consumer Financial and Protection Bureau, the Volcker Rule and the Financial Stability Oversight Council.

All those who know that Muslims will no longer be allowed into the US.

All those who can regain the jobs that undocumented workers “took” from them.

Those anxious to see the Supreme Court in the image of the late Justice Antonin Scalia.

All those anxious to see a wall built where there is already some 650 miles of fencing 18- to 26-feet high, costing in the billions over the last 15 years.

Coal miners in Ohio, Kentucky and West Virginia who expect those Appalachian mines to be reopened and paying inflation adjusted $55 a day as in the 1970s.

Everyone anxious to get back well-paying, union secured manufacturing jobs.

Those happy to see the “political correctness Nazis,” as Bill Maher called them, get chased out of Congress and the White House.

Everyone who owns guns.

Those who do not see anything in global trade deals benefiting their lives.

Those who hate Obamacare and look forward to its repeal.

Those who want to pay less for gas, no matter what the climate change “junk scientists” say.

All those ecstatic that their gut feelings and personal opinions about Donald Trump as “the change they have been waiting for” were vindicated by his election.

All those whose tweet attacks on Hillary Clinton and Barack Obama paid off.

All those who see a social media revolution in political discourse as progress and a blow to the old analog order of communication.

All those “forgotten people” slated for a capitalist “creative destruction” who got their voices heard and answered in this election.

All those who can face a liberal and say, “You lost.”

All those anxious to see the Democratic Party either go further into a boutique agenda of gentrified causes, or deeper into a Bernie Sanders’ socialism, both making it easier for Republicans to stay in power.

All those who see a politics abolishing racism, sexism, ethnic bigotry, religious intolerance and homophobia as less important to “promoting the general welfare” than a politics reasserting the working class and the middle class into the future of the US.