If [Fill in the Blank] Becomes President 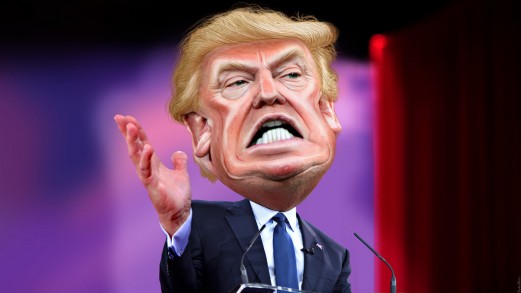 I ask the reader to imagine, along with me, at what our presidential candidates might say and do once in the White House.

President Trump is now president because he has brought all matters previously governmental into a personal and private space, his own Being.

Thus, he represents the epitome of a widespread crusade in America to bring what is social, public and political into individual ego. He campaigned not only outside politics but also as a personal Force that would replace every Washington “Big Brother” bureaucratic nightmare, Congressional “do nothingism,” and Obama curtailment of our freedoms and our guns.

President Trump is president because his being president represents a triumph of personal will to tear down, mock and ridicule in your name. When Everyman is set against every man what better representation of this nihilism and anger than a man who recognizes no other authority than his own voice?

Danger to the plutocracy rating: He’s the mogul who moguls can’t trust in the same way they could have trusted Mitt Romney, Carla Fiorina or Ted Cruz to defend and extend plutocratic, i.e. transnational corporate/Wall Street, rule. And as his power will in time corrupt him totally, Republicans will share the consequences of that.

Dr. Carson is not affected by his lack of mastery but quietly espouses what is false, absurd and mysteriously connected to a foundation of beliefs that though clearly muddled and dark, are yet presented in a Beatitude revealing manner. American politics has never seen anyone quite like him. He is not only outside American politics but he is far out in very special ways. This irrational allure has brought him to the White House. Or, he might drop out before that can happen.

Danger to the plutocracy rating: supremely self-confident in his own confused and uninformed beliefs and therefore may be difficult for the plutocratic elite to control. His close personal sponsorship by Jesus may make it difficult for the 1% to get him to listen to Mammon’s side of things.

President Rubio has decided to retroactively refuse his own parents admission to the U.S. but as they are already here, he will round them up, and send them back to Cuba.

If you are a photographer or a cake baker, you will be happy that President Rubio allows you to turn away gay customers but if you are running a hotel, you have to let them in. If you are rich, you love President Rubio because he has eliminated any capital gains tax and cut corporate taxes 25%.

Get some American boots on the ground in Syria to fight ISIS, President Rubio demands on his second day in office. He is not haunted by the failures of Viet-nam (he was 4 when that “conflict” ended) nor did he “free choose” to fight in Afghanistan and Iraq. He had, in Dick Cheney style, more important things to do in his life than pushups in boot camp. War, as his new version of Cheney/Rumsfeld explains to him, is a win-win situation. It is a chance to “cannon fodder” the bottom 40% of the population as well as give lucrative profits to shareholders in a mostly privatized war.

Danger to the plutocracy rating: This is an immigrant kid fulfilling the American Dream of getting it all so he’ll look for all the help he can get from that top 1% and in turn do all he can to help them. He may, by the time he’s Hillary’s age, buy a multi-million dollar estate in the “New” Cuba.

This is Joe Stalin mellowed on the edges by Tony Soprano as President of the United States but without their protean intellect.

Danger to the plutocracy rating: It would be difficult for the 1% to keep him from being jailed or impeached.

Government is stupid, mostly useless, in the way of profit making, and technologically backward. Corporations are innovative, job creating, and technologically cutting edge. CEO’s make the best presidents because they know how to grow a business, put people to work, cut wasteful expenditures, and open new marketing frontiers. Most problems have hi-tech solutions implemented by business, not government. A plutocracy is a country run by the Winners who insure that democratic elections are grounded in a “money is speech” and “corporations are persons” rule. Unbridled capitalism doesn’t head toward democracy; it heads toward President Fiorina and plutocrarcy.

Danger to the plutocracy rating: Zero; only a danger of a complete re-emergence of feudalism, American style, high.

President Jeb Bush, the Bush who mixes his father’s patrician befuddlement of everyday life with his brother’s retreat at tough moments to cutting brush, may wake up one morning and do exactly what family expects him to do. Get eight more years of profits to shareholders in before greenhouse gases push riot and chaos, preempting thankfully, shareholders feel, any democratic socialist remedy Bernie Sanders offered. President Jeb Bush owes his victory to his primary challengers. The lunacy of both Trump and Carson became finally transparent while Rubio’s and Cruz’s own likeness to snake oil salesmen and carny outside talkers also became transparent. And Americans, who had been outsourced, underpaid and fired days before retirement under corporate rule, were wary of transforming the country into a corporation as Carly Fiorina promised.

Danger to plutocracy rating: None. He is a bona fide member.

President Ted Cruz, nicknamed Senator Iago, The Dark Confounder, may wake up one morning, call his staff to make sure that Obama the Marxist has been sent back to Kenya, and then fill out his flat tax return on a postcard and mail it to the corporation that has replaced the IRS.

In an effort to help the most economically vulnerable, President Cruz will make sure that there is no minimum wage. Ever the Dark Confounder, President Cruz endorses capital punishment as recognition of the preciousness of human life.” The lives of all those who now have health care insurance thanks to the Affordable Care Act, aka “Obamacare,” are not, however, precious enough to have health care. In regard to clean water and clean air, the Dark Confounder adamantly opposes “the war on coal” and calls for a “volunteer conservation” in which the oil and gas industry can be “environmentally concerned” within the parameters of their profit goals.

Danger to plutocracy rating: If President Cruz is like Senator and Candidate Cruz, he will be playing a mounting, clandestine quid pro quo game with the plutocrats leading to a revolving door exit that will place him, whether he’s loved by the social elite or not, squarely among the 1%. He’ll be in a position to rival the $125 million for speeches the Clintons have made since 2001.

“Will any of your goals pass a Republican Congress, Mr. President, and will the American public warm to your socialism?”

“Damn no. They won’t. There’s as much chance of that as my being elected president.”

“But you have been elected.”

“I suspect that as our climate changes to disastrous effects we will all get together and try to mitigate those effects.”

“President Obama had no luck in getting everyone together to agree on anything.”

“Look, it’s a game of giving away something to get something. President Obama spent six years thinking he could bypass that game. I know from day one, when and how to lean into those people he did not have the political savvy to deal with. It’s harsh but simple and true.”

“But what if as people like Bernie Sanders, Elizabeth Warren and Robert Reich say we need to transform not play along with the climate deniers, the supply siders, and the Market Rule crowd?”

“That’s not real politics. That’s visionary politics. I don’t do that. It can’t be done. You have to recognize where the power is.”

“Look, right now I can maybe effect some half measures which is better than all those who ran against me for the presidency, except Senator Sanders, and he always had as much chance of winning a national election as Greenland has of not melting away.”

“Yes, it’s always regrettable when we can’t make the visionary real but then you grow up.”

Danger to plutocracy rating: Minuscule compared to those like Elizabeth Warren inspired by Occupy Wall Street and Bernie Sanders whose counsel could have sustained OWS beyond its brief flare. Compared to any Republican presidential candidate, Hillary is less reachable but more likely to provide a veneer of social concern, which is the Liberal’s role in a plutocracy, than any Republican president. Beyond giving Wall Street a few headaches, Hillary may be the best cover for Republicans as the wealth gap increases and the U.S. heads toward its eventual “Uprising.”