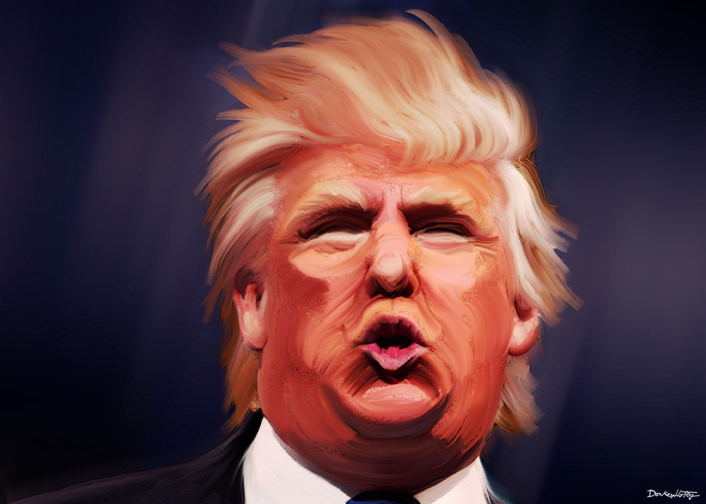 Our attachments to Trump are far below the level of rational understanding and as these underground or abyss level attachments have proven politically potent in the past, we cannot fail to be attentive. Trump has all the gravitas of the Id, the magnetism of the Inferno.

A compelling and in depth review, one that makes the necessary historical connections, of the meaning of Trump’s presence on the American scene can be found in Henry Giroux’s exemplary “Trumping America,” which ends with answering the question as to why we should know this and what can we do about it: “Rather than despair or laugh over the spectacle of Trump’s media romp, a more promising beginning might be to recognize the utter intellectual, moral and political bankruptcy of the extremists now running the US government and economy of which Trump is symptomatic. This suggests the possibility of rethinking politics in the way the Black Lives Matter movement is doing, one that is connecting different groups under the banner not of isolated and short-lived protest demonstrations but calls for real ideological and structural change.” (Truthout July 8, 2015)

While Giroux stays on the surface of rational explication, I append here the footnotes of a subliminal American imaginary, one that sits down at the Mad Hatter’s tea party table and tries to represent the topsy turvy sense they make. My impetus was Rachel Madow’s expression of frustration regarding America’s attraction to Donald Trump. She could not imagine how Donald Trump could in any way be taken as a viable presidential candidate. She remains, as always, an incisive reporter of an intelligible consciousness. Unfortunately, our attachments to Trump are far below that and as these underground or abyss level attachments have proven politically potent in the past, we cannot fail to be attentive. Sad to say, the “intellectual, moral and political bankruptcy” Giroux cites is not limited to “extremists” but seems deeply embedded and pervasive in the American cultural imaginary.

I have six reasons to offer her, reasons you can dive into the American cultural imaginary of the moment and find. Largely, they represent a dark logic of the Id, of subliminal recesses we in a past analog world made efforts to conceal. Now in our age of interactive cyberspace rant and snark all manner of nasty, virulent invective, all displays of the worst devils of our nature reach the light of day. It makes little sense to say that Trump is a buffoon no one should pay attention to, least of all as a viable presidential candidate, when Trump has been leading all Republican presidential candidates in the polls for over two weeks. There are troubling attachments and affiliations being made in the American cultural imaginary that we cannot simply rise above by applying a rationality that is not universally acknowledged, or a realism that rejects the phenomenal nature of reality, the “as it appears to me” nature of reality, or a sanity that, as Lewis Carroll has so brilliantly portrayed to us, depends greatly on which rabbit hole your mind has fallen.

It is troubling that Trump has found a welcoming reception with so many. Republican candidates for the presidency have been fearful of rankling those who share Trump’s views because these candidates are courting the votes of these people. The New York Times reports that it is “exceedingly perilous for the Republican Party to treat Mr. Trump as the pariah many of its leaders now wish he would become.” (July 10, 2015) But this is media’s preference to call a presidential election as a horserace. What this approach obscures is the real magnetism of the American electorate’s dark affiliations manifested in the coded appeal to racism against blacks that permeates Republican politics and more recently the xenophobia and bigotry that lies at the bottom of the immigration issue. Quite clearly the appearance among Republican presidential candidates of a detachment from Trump belies the fact that the appeal of their own platforms lies in the same muck as does Trump’s.

A Republican victory in 2016 will not be won by an appeal to the better angels of our nature but rather to a baseness most easily courted. A magnanimous generosity toward others, a sense of equality and fraternity, a sense of cooperative sharing and mutual aid are not fostered by a zero sum capitalist enterprise. It is therefore no surprising that the better angels of our nature are not nurtured when we live within a “war of all against all” culture. The persistence of this warfare of each against each has long ago permeated the American cultural imaginary. And, once again, cyberspace has brought this moral and social devolution into clear focus, more clearly displayed than the disingenuous concealment game of politics.

Cyberspace is filled with open windows to exhilarating discoveries but also to an unsettling glimpse of the worst in us. What we find revealed are profound indicators of what is going on beneath the surface of what we read and say. Trump is the most recent tip of the iceberg in the Great Ocean of Offline Realty to break the surface and he makes a number, I list six here, attachments to links we may pretend to be too many steps from the abyss out of which he emerges to perceive.