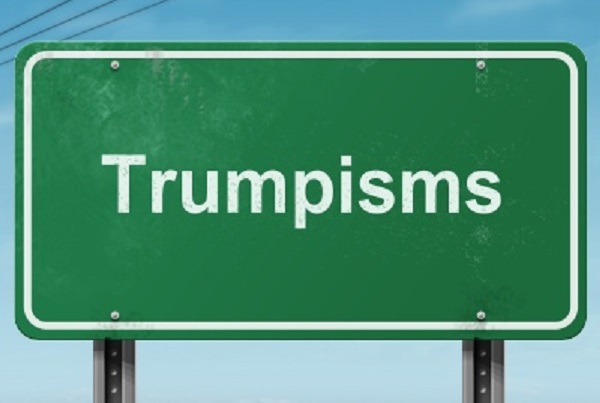 “[Y]ou shouldn’t take irreversible steps as the result of a reversible Presidency.”

– Rob Malley, quoting the French view of President Trump, in Susan B. Glasser, “An Ocean Apart,” The New Yorker, December 24, 2018

It is not crazy to say that right now the only ones who would like to see Trumpism outlive Trump are the Trumpians.

Democratic Party? There’s a seam in the Democratic Party which may rip open and may not but it’s one in which both sides want to end Trump’s presidency and the damage that presidency has done totally dissolved and expunged from the record of U.S. history.

Republican Party? It can go either of two ways: seek to hold on to that 35% of the population tied to Trump the way Beliebers are tied to Justin Bieber, or seek to become once again the party of globalized, free trade, free market capitalism advocating Neoliberal economic policies and Market Rule rather than the arbitrary, capricious rule of a 21st century Mad George III.

Democrats risk fueling the fires of Trumpism if they ignore what the accelerants were that fired up the Trumpians — Trump being only the match — in the first place. Treating the Trump followers as obstacles scheduled for extinction rather than as part of the damage done by Trump and therefore in need of recuperation would seem to guarantee of a return under a new charlatan celebrity, never a shortage in the U.S.

Democratic Socialism, a banner that Bernie Sanders and now Alexandria Ocasio-Cortez choose to fly under, is a red flag to Trump’s followers and if it gains momentum in the party will work to keep some form of Trumpism alive. Ocasio-Cortez’s Green New Deal appellation makes more sense because it puts her in a position to review the socialist aspect of FDR’s New Deal and its economic benefits to the working class as well as focus on global warming as THE most crucial issue to be responded to politically.

There are several reasons why Trumpism will not outlive Trump, and most have to do with the positions Democrats or Republicans can take.

Rather than political or social ideology or any form of platform discourse, what Trump will leave his followers is a legacy of impulsive tweets.

The Art of the Deal is not Marx and Engels’ The Communist Manifesto, Hitler’s Mein Kampf, FDR’s The Second Bill of Rights, Mao’s The Little Red Book, Fidel Castro’s The Declarations of Havana.

The legacy of Trump is not discourse but personality, not ideas but a kind of huckstering that vanishes when audience and opportunities also vanish. There is no permanence to either any huckster or his or her words.

There are no roots or foundation to Trumpism to be found in U.S. history.

Was there a political or social ideology or any form of platform discourse that Trump accessed and built upon or was there rather an incoherent anger, fear, frustration, dysphoria and disaffection that Democrats and Republicans had ignored and Trump responded to on that same gut, affective, prereflective level, the domain of the reptilian brain?

A singular interruption by an aberrant personality into any order of things is potentially destructive but not generative when there are no ideas prior to or developed contributing to a legacy of thought.

Both contemporary market and conservative Republicanism has endured since Reagan, but Trump is attached to neither. And he has not created any ideology that a new party could attach itself to, as white nationalism and fascism are not new and not liable to become a party in the U.S. that will subsume Democratic and Republican parties or rival them in elections.

The Trumpian electorate has no platform of ideas they can hold onto and seek in a new avatar of Donald J. Trump. Their plight is similar to that of the Occupy Wall Street movement in the U.S and Mouvementdes gilets jaunes in France.

There is the fire of revolt and disgust in both which has not scaled to a sustained political organization.

What Trump transmits is an irreproducible derangement, as unique as an inmate who declares he is Napoleon.

Deteriorating to tragic conditions created by Trump’s tweet regime will undoubtedly consume the attention of everyone when he is gone, including the attention of his followers who sought economic relief in a Trump presidency.

The increasing ravages of global warming and Trump’s denial of its existence and the government’s role in mitigating those ravages will undoubtedly create a legacy neither he nor his followers anticipated.

As the whole country moves as rapidly as possible from the nightmare of Trump’s presidency, partially because we will be absorbed in recuperating from that presidency, the only legacy Trump bequeaths to us will be comparable to awakening from a nightmare and realizing it cannot stand the light of day.

Those damaged in various ways by his aberrant rule will have no time or inclination to carry that rule into the future. Alt-Right/neo-fascist/white nationalist/ Deep State paranoia can perhaps once again find place in remote dark corners of cyberspace and so vacate the national media scene.

An allegiance and confederacy of worker owned businesses in which profits go to workers and not shareholders, an increasing number of voters of all color, a rising critique of casino, Market Rule capitalism formulated by young voters, an accompanying movement toward social democracy, and an elevation by the young of environmental concerns to the number one political priority promises to have little or no tolerance for Trump or any extension of Trumpism into the future.

The con man’s ploy — fire up racial conflict, confound reason and truth, confound good and evil, make your neighbor your enemy and your enemy your neighbor, turn education into a prison house of debt, curse and scorn everyone who stands against you, define greatness as only an expansion of the President’s ego, his businesses and the adulation of his supporters —  the youngest and bravest among us are working to inoculate themselves, through political involvement, against, against the continuation of any of this.

The Fourth Estate vs. the Trump Regime What is taking place in Burma right now is a military coup. There can be no other description for such an unwarranted action as the dismissal of the government by… [...]

Culpability and Recalibration: MBS and the Killing of Jamal Khashoggi It was a brutal way to go, and it had the paw prints of the highest authorities.  On October 2, 2018, Jamal Khashoggi, the Saudi Arabian insider turned outsider, was… [...]

Perspectives on the Storming of the Capitol from a Military Spouse “Are you okay?” asked a friend and military spouse in the voicemail she left me on the afternoon the mob of Trump supporters breached the Capitol so violently. At home… [...]

The “Murder” of John Hunt Morgan: “You Have Just Killed the Best Man in the Confederacy!” John Hunt Morgan, the "Kentucky Cavalier," readily embraced the role he was born into. Raised in wealthy Lexington, a scion of Bluegrass planter aristocrats, famously expelled from Transylvania College for… [...] Many more black faces on your movie screen. Same old shuck and jive from finance capital. AND . . . why are so many foreign Blacks impersonating African-Americans? I saw… [...]