‘Misfits’: Rebels With Too Many Causes 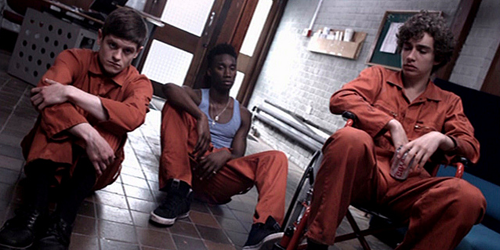 When the third series of the UK’s Misfits becomes available on Hulu on 19 December, viewers might be reminded of the old Carry On! Films. In its latest incarnation, the series delivers a steady barrage of zaniness, a punk-like anarchy, a good sampling of cockney low farce, as well as mayhem and blood.

This zaniness began two years ago, when five 20somethings doing community service in the Docklands area of East London were caught up in a sudden storm that left them with superpowers. This bit of sci-fi serves as it does in Phillip K. Dick or Rod Serling, compressing and accelerating classic themes, like individuals finding their destinies or communities being forged, while allowing for some Monty Python-esque hilarity. Misfits adds another ingredient to this amalgam, recalling Big Brother, but with more intelligence. I mean that the show creates a world riddled by chance, mystery, inexplicable good and evil, and an ongoing irrationality, interrupted by the bonds of face-to-face friendship.

In the first episode of the new season, our superheroic misfits have gained new powers since the last series. They also face a question: can the show survive without Nathan (Robert Sheehan), a clown of unbridled feverish manic disruptive hilarious charisma? His magnetism shows up now in Rudy (Joe Gilgun), who doubles the insanity by having a doppelganger, and the twosome – one embodying a Nathan-like full-bore mania and the other seeming a voice of conscience—introduce the rival personalities of Rudy’s own psychomachia. Alas, he comes to no resolution, even when his good self appears to save him. He remains neither converted nor transformed, a complex mixture of incurable jokester ready always “to do the dirty.” “I thought you were a shallow little prick,” a girl with a Matrix-like power to stop time tells him. Rudy’s response is hardly reassuring: “Oh no, it’s all a front. I’m deeply insecure.”

It turns out that Curtis’ (Nathan Stewart-Jarrett) new power is also a means to doubling, as he can become a woman, called Melissa, at will. While she helpfully observes, “You think you know someone, but they turn out to be someone totally different,” Curtis describes the dilemma more bluntly: “I don’t think there’s an official term for this shit.” With Rudy and Curtis/Melissa, then, the show poses a basic question regarding what it means to be human, to feel integrated or consistent.

The new season thus reintroduces Misfits’ interest in how science fiction can ask questions about the connections between pasts and presents, and changing definitions of community and individuality. Though the show has been around since 2009 (when it aired on Channel E4), its newsworthiness seems enhanced by current events, including the Occupy movements around the world. As communities are sorting out how to make themselves heard, the Misfits’ status as perennial outsiders, and as “protesters” in their way, makes them now seem representative in ways they might not have been earlier.

Like so many of the Occupy protestors who refuse to list demands or name leaders, these misfits reject self-aggrandizement. They also—these episodes having been written and produced before the Occupy movements took hold—maintain a detachment from obvious popular causes, instead using satirical asides to make their points concerning their frequently killed probation officers or own shifting loyalties.

This detachment may or may not have to do with the peculiar devices of this science fictional world. The Misfits don’t rely on cyber and cell ware, they don’t use Facebook or other social media to make connections. Instead, their rebellion is a throwback to the last century, when anarchy seemed like a productive tactic, or even a belief system.

And they do discuss their beliefs. For all their absurdity and buffoonery, fantasy and disorderliness, these five misfits mean to dismantle a resident order of things at an historical moment when such dismantling, and not austerity, seems sensible. While todays OWS points a finger at Wall Street and its corruption of government, the rebels in Misfits have more nebulous targets. They’re angry because they’re young, and also because they’re going to grow old.