In a feverish state of mind, Gulliver enters a bizarre world of presidential politics 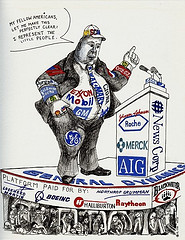 My thoughts were feverishly gestating.
I here pen a précis of that to which I refer, attempting to bring to reasonable account what in fact was veiled by dark derangements brought on by my fever and a long fortnight in which irrationality and a nightmare circus ruled.
I found myself ambling around an unfamiliar town, an ambling that brought me into almost daily contact with an increasing number of berserks seeking political office. I saw their intent, dear Reader, as nothing more than mania’s drive to extend itself, rather in the fashion of vermin or virus seeking to expand their unhealthy assault on the normal, the sane, the innocent.
I cannot help noting that here politics has become very unusual. I assumed, as we all do, that the dark desires and ambitions of Mr. Freud’s Id had long ago been overlaid with a veneer of Ego restraint. Scrunch or be scrunched, rape and pillage, smashing boot heels, hang’em high, take no prisoners, ethnic cleansings, tar and feather and so on had been kept at bay, making only sporadic appearances immediately followed by some renewed attempt at civilized dialogue.
All that suddenly vanished, as things tend to do in a feverish delirium. A more observant audience may have perceived a slow incremental movement toward the present descent into an abyss in which instinctual appetites, fears and hatreds, absurdities and stupidities, abuse and intractability ruled.
Allow me, my dear Reader, to introduce a powerful figure at the center of this Inferno but at the center in the way the assailed Keep is at the center of attack or the way an assailed wildebeest is at the center of attack. I must at once acknowledge that others would portray the scene differently and cast this figure as an alien intruder, a black ant in a red ant colony, a War of the Worlds Martian invader, an unbeliever in a revival tent, a palestino in a synagogue, a union organizer at WhaleMart. But I somehow at once understood, within the the hi-speed at which time travels in a fever zone, that this figure is powerful in the way a magnet is powerful: not because of its own actions but because of the reaction it produces in others.
Mr. Nodrama did not have to act in order to elicit the reactions of many. His mere physical presence was sufficient to energize an antagonistic reaction. Others argued that in accord with the laws of physics no reaction would have been produced if Farouk had not acted and acted in a way that violated the foundational, Constitutional values of the homeland. Still others argued that Farouk had himself only reacted to certain calamities and crises that propelled any rational and compassionate person to seek remedy and relief.

I sat, as in a lecture hall, and listened to these various Power Point presentations.
I was most taken with the view that as a result of a willingness in this country to allow the Goddess Fortuna to spin the wheel and fix a course, a great deal of wealth had been pocketed by a very few while a great many were already bankrupt, in every way, or on the verge of being so. A suspicion slowly arose that the wealthy now owned the Goddess’s wheel and had fixed it in their favor.
My personal observation, which no one in the room seemed to heed, was that there was great beauty in compound interest when wealth was owned and not owed.
To those who felt that fortune favored the wealthy because they owned the wheel as well as the legislators who kept the Goddess Fortuna at the wheel, a Mad Hatter pointed out that Mr. Nodrama had won election by promising to change all that. It seemed clear to me then, as things can only be so clear to a disquieted mind, that if wealth meant power, wealth had not enough power to keep any threat to itself out of office.
I let this lucidity wash over me the way a slight breeze bathes the forehead of the feverish.
My dear Reader, perhaps I was naïve in this in the way any malaise makes a child of us. Mr. Nodrama had threatened the profits of the health care industry, minimally, but in all else he seemed to have fettered himself with an odd psychology. Mr Farouk seemed to believe that the pursuit of profit could be deterred by rational argument on behalf of people and causes without the power to affect profit or loss. His rationality made him vulnerable and pliable to the axiomatic ruthlessness of profit to shareholders and return on investment.
A Mad Hatter then shouted out that power still extended to a middle class not yet brought to its knees or brought to an acceptance of rule by the Goddess Fortuna.
I seemed to be viewing it all through a glass darkly.
I was suddenly infuriated. It was not the threads spun by the pundits or the details of arguments and attacks which infuriated me. All of this was a web of inveiglement, pointless differences and endless deferrals. What repelled me was the character of those who presumed to solicit my acceptance of their stupidities. It suddenly seemed to be that my acquiescence to all before me was what was required. I therefore struggled to be the only sane person in the room. I found a great need to be a calm center amid a churning ferment of pixilated possession.
I was introduced, as a calming measure, to Mr. Rhomboid, a man who cannot win the hearts and minds of his own political party for many reasons, the first being his own rhomboid personality which is as difficult to mesh with a winning proportion of the voting population as it is to insert a square peg into a round hole.
His “rhomboidness” fits neatly into a very small segment of the population and that segment has limited public recognition due to a penchant for living in private, well-secured compounds. Mr. Rhomboid’s country and yacht club associates and NASCAR owner compatriots can therefore give him little assistance on the stump, their appearance publicizing detachment rather than camaraderie.
I am hardly the man, my dear Reader, to fault a man for a character forged in privileged circumstances, or, to berate the man because he displays the characteristic values and opinions of his class. I can easily see such a man as a president of his country club or CEO of a business whose success depends upon investment by the wealthy. And, truth to say, the patrician has appeared successfully on the political stage of my homeland, but in every case, the character was not patrician. The character of each was formed in a manner that extended toward and not away from the average citizen, displayed a breadth of imagination that created understanding and empathy. In the case of Mr. Rhomboid there is no indication that his character extends beyond the circumstances of isolated and detached wealth. He would be viable as a monarch in an aristocratic order but not as a president in a democracy.
Mr. Rhomboid is an up and down again favorite of his party, which means they don’t want him but not for the reasons I have suggested. They don’t want him because he is not a “true” conservative.