The Politics of Crazy and Stupid 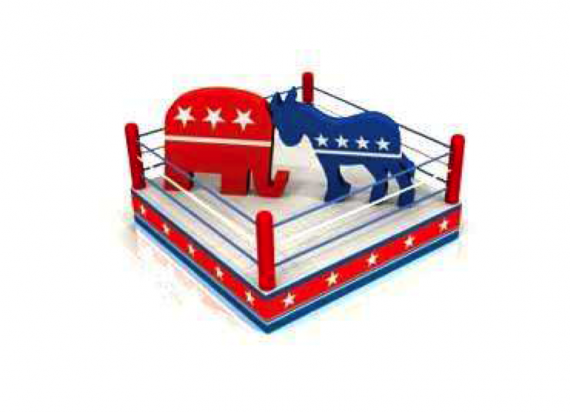 “We turn on the TV or surf the Internet, and we can watch positions harden and lines drawn, and people retreat to their respective corners, and politicians calculate how to grab attention or avoid the fallout.  We see all this, and it’s hard not to think sometimes that the center won’t hold and that things might get worse.”

“Mere anarchy is loosed upon the world” W.B. Yeats wrote in 1919 and now as the Republican National Convention begins today in Cleveland, we do not expect it to be a “ceremony of innocence” because anarchic forces are once again at loose in the world.

Chaos is the offspring. Can the line of authority hold? Can the police line in Cleveland hold back anger triggered for so many different reasons? Crazies appear daily in the media, on and offline, and because we cannot fathom their motivation, we concoct our own opinions out of our own confusion and anger. “Crazy” is not a signifier that takes us anywhere toward understanding. And because there seems to be now such a great variety of craziness operating in the world, we feel the need to retreat to our own hurt and fear, to our own grievances. And so the boundaries of reason constrict to personal dimensions and what ensues is a politics of non-engagement with those we blame.

Alongside the crazy, we have the stupid who are unable to enter our personal domain of judgment and determination. This is not a hopeful politics but when understanding is overwhelmed, your reasoning can only conclude with the judgment that anarchy is let loose in the world. We conclude that chaos is all around us because the crazies have been nurtured by stupidity, not our stupidity certainly but the stupidity of those outside our own order of reasoning.

If you venture outside these personally designed domains of reasoning, you have a shot at distinguishing crazy from stupid and in the process get a glimpse of sanity and reason. This is not easy, because we live indoors and online and because online, unlike the “real” world, is subject to your own choice design or tailored to suit your online profile. You want to avoid this vicious circle. It’s crazy not to.

The stupid category is obnoxious, because not only it fits Donald L. Trump’s tactics of discrimination but also because it is a judgment without specification and a presumptive judgment made from a position of undisputed intelligence. No such position exists, or no longer exists in any universally accepted way. That state of affairs seems crazy in itself. And surely one may have good sense and judgment when it comes to one thing and not another. The stupidity that floods our present political judgment is the stupidity I am after here. Are we stupid in regard to both the political and economic conditions in which we find ourselves?

Racism is once again in the headlines as a collapse of any notion of the common good or any interest in egalitarianism triggers meanness and contempt directed at all those who are caught at plutocracy’s bottom. We see terrorists everywhere, at home and abroad, some rising from hatreds fashioned and manipulated but not by us, some rising from hatreds fashioned by our own actions. ISIS may have appeared without the actions of George W. Bush and company in devastating the Middle East but George W. Bush emerged a second time as president because of the political stupidity of the American people.

Poor sense and judgment is not self-created. There has been a long campaign by an emerging plutocracy to distract, seduce and confuse since radicals of the `60s and early `70s took over campuses, entered the American cultural imaginary with a “greening of America,” and made it to the headlines with stories of corporate profiteering in the undeclared war in Viet-nam. Everyone who wanted to upend the “Corporate State” was a crazy, stupefied by drugs and brainwashed by campus radicals. Economics made these crazies as extinct as a meteor had made the dinosaur. The rising stock market, blessed by Reagan, underwrote casino capitalism and plutocracy and sent communes and drop-outs into oblivion.

Lack of good sense and judgment is a lack we can lay at the doorstep of both the media and education. I am not disposed to thinking that unintelligence is something that enters every fiber of our being. We may not be culturally able to distinguish intelligence that lies outside our priorities, deeply etched priorities summed up in “If you’re so smart, why aren’t you rich?” But it also remains true that the cabalistic complexities of the financial sector are matched with the complexities of a society the chance play of that sector has created. It is therefore no easy matter to reach a level of good sense and judgment in our millennial society. It is not difficult to be stupid in this regard, but we are not able to reach that awareness, caught as we are in the vicious circle of the superiority of our own personal opinions. We need journalism and education to bring us out of that vicious circle.

We have not been accommodated here, not for a very long time, a time long enough to bring Trump into existence.

Print journalism and investigative reporting, i.e. “long reads,” lost the race for eyeballs to TV news, which was MTV’d by FOX News, went 24/7 cable and then Reality-TV inspired and finally both, print and TV, went “old school” as social media reached minds via ubiquitous Smartphones. Offline media is incapable of leading us out of our political stupidity because of a commitment to balance in the news, most likely tied to some misguided sense of objective, neutral reporting. What seems clear is that a powerful conservative lobby wants to muddy all threats to a plutocratic regime and the cult of balance is a tool to achieve this.

Online news media is a itself a chaos of crazy and stupid, amusing and soporific, insights and mindboggling confusions equally adrift in a center less, boundless cyberspace. Facebook, the chosen “social” media that, like Twitter, posts political observations the way red meat is thrown to lions, rolls out interminable and without history, like Twitter, toilet paper-wise. If the Republican National Convention does turn all shades of crazy, it will also be reported in all shades of crazy, leaving us to construct our personal sense of good sense and judgment within the unreliable but self-authorizing space of our private politics.