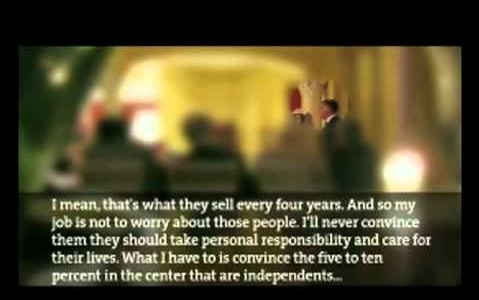 Only 51.3% of the voter age American population came out to vote in the infamous 2000 George W. Bush/Gore “chad” presidential election. According to the wisdom of 2012 Republican presidential candidate, Mitt Romney, 47% of Americans who pay no income tax will vote for Obama because Democratic candidates attract voters who believe they are “entitled to health care, to food, to housing, to you-name-it.”

If that same 47% class– “moochers” in Romney’s view — voted in 2000 for Gore that would leave only 4.3% voting for George W. when in fact the 51.3% turnout divided evenly down to the micro-chad level. A more plausible explanation for Romney dismissing 47% is that these folks traditionally don’t vote. They skirt the poverty line or dive below it; the “Underclass.” Neither Romney nor Obama speak to them because they’re not listening and they don’t vote and therefore they don’t matter. Unlike the Koch brothers or Sheldon Edelson, none of these votes can cash in on “money is speech.”

Obama makes an appeal to a middle class that is struggling economically and promises them that the government can help. And it can if you’ve been following the Keynesian economics of Paul Krugman and Joseph Stiglitz.

If you’re temporarily unemployed because at one time you were employed, the Democrats don’t want to remove unemployment benefits. If you don’t have health insurance and are not Medicaid entitled, Obama’s Affordable Health Care Act offers it. If you believe that there is no security in stock market speculation, then the Democratic opposition to Social Security privatization appeals to you, if you’ve been paying your FICA. . If you believe that the “invisible hand of the market” working slyly on Wall Street has plunged you and the country into economic crisis and you weren’t already in a crisis state for other reasons, then Wall Street regulation appeals to you. If you believe that a drastic wealth divide represented by 400 Americans having as much wealth as 150 million Americans is corrosive to an egalitarian democracy, then Obama’s tax the rich plan makes sense to you, if you’ve got the time to think about such remote scenarios.

Whether any of these will keep the non-voting 47% from some version of an American Spring revolution is anyone’s guess, but it seems clear that both parties, with varying degrees of faith, believe that “bread and circus” distractions plus a rising ignorance and obliviousness will fend off any such uprising. Occupy Wall Street, in this cynical view, is no more than a helpful, innocuous release of steam. Real revolution in the offline world is itself in the U.S. almost a “back in the day” and “old school” deal. But everything “back in the day” seems to reappear, as any retro designer will attest.

Obama’s acquiescence to the political reality that this 47% doesn’t vote confirms our sense of how cynical politics is. His failure to present a Clintonian tutorial on how a democratic, egalitarian quality of life for all can be regained and preserved by not aspiring to the wealth of the 400 but by legislating on behalf of the 47% is equally lamentable. What’s unpeeled here is the real divide of Have and Have Nots which propel our politics and not a party, ideological divide. Both parties not only ignore the 47% but fear them. Middle class comfort and convention, slowly vanishing, is as fearful of the moochers as are the top 20%. Obama’s heart is with “re-gentrification,” a re-establishment of bourgeois contentment. Re-establishing a middle class within the disaster of a Have and Have Not society, according to rules for winning that continue a fierce, unjust competitiveness conflates a liberal vision with a conservative one. What to do with a group, say 47%, who were never gentrified and never bourgeois and whose “contentment” is sinking lower and lower every day, is not an issue with Obama or Romney. These 47% are to become extinct apparently, go south, accept their “creative destruction” and let the U.S. be the land of the prosperous as both parties urge.

Romney’s appeal to the middle class is not based on what an ideology of “Let Markets Rule!” can do to help because here you are on your own, free to choose and assume personal responsibility. Don’t look for help from the Winners but be assured you too can be a Winner, if of course the government doesn’t regulate your free choices or tax your winnings and hand them out to the mooching class. Your choice in every case should be to start a business.

It’s difficult to say how much appeal this has to a middle class which is more involved in paying bills sent by businesses than starting their own business. They could of course adopt Oprah’s strategy and will that a check comes in the mail and not a bill. If they still receive bills, they can conclude that their willing is not strong enough. The strong have a will to power. And so on. Perhaps there are people who simply want to see if they fit in this class and therefore adopt a fondness for Ayn Rand. They go beyond their struggle to assert their personal will to power. You prefer, in this bit of psychology, to stand with the winning well-to-do that have power than with the cashless and powerless. Historically, this sort of appeal has worked with a struggling middle class.

Romney’s serious appeal to the middle class is mostly, however, not in “You Too Can Be A Winner!” but in a negative, distaining and dismissing appeal. This is where the 47% that Romney won’t play to comes into play. They become the abyss that awaits the middle class unless they align with those who have successfully triumphed and risen to pinnacles of success. Rather than reaching a hand down to help the unfortunate — who have we are told willfully made bad choices — the middle class must join with the top 20% and stop the hemorrhaging of U.S. success and prosperity, its triple A credit rating, all caused by the mooching of the 47%.

Tragic is the slow, incremental debasement of the bottom 47% as their schooling fails them, as the enticements of cybertech increase their debt while drawing them further away from the challenges of the offline world, as the separation of poor communities from the gated communities of the rich intensifies detachments of understanding and empathy. The closer the lives of the 47% appear “as nasty, brutish, cruel and short,” the the greater distance the middle class and the upper class seek from this abyss.

A very probable middle class descending into that abyss occasions a fearful urgency to turn from it, to seek higher ground, though rescue is more surely in the direction of improving the lives of the bottom 47% rather than running from them. Running to and seeking aid from an ideology that tells you that you are on your own, that no hand will be held out to you, is a profitless enterprise.

Nevertheless, this sort of appeal to the middle class has had an enduring success. You can be assured that the “playing field” is level, though of course a seriously wealth divided society, one of French ancien regime proportions, a society that upholds “money is speech,” and a society now under the free play of money in politics unleashed by Citizens United, has not had a level playing field for a very long time. Ask the 47% … Oh, no. They