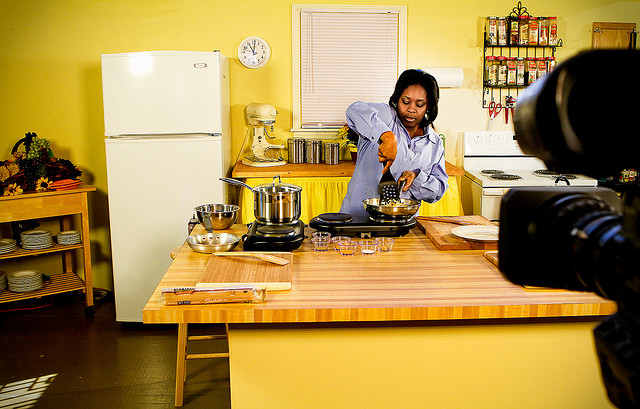 “[O]ur culture’s food madness tips into food psychosis, at least among those with keen appetites and the means to indulge them.” — Frank Bruni, “Dinner and Derangement,”NYTimes October 18, 2011

“One night, a waitress revealed that the fish-tempura taco with cabbage, and lime mayonnaise was made with `baby shark,’ prompting one diner to wonder aloud, ‘Should I feel bad about this?” She should not; the term is a colloquialism for cazon, a small school shark common in Mexican cooking, and not the veal of the sea.” — Silvia Killingsworth, “Table for Two,” The New Yorker September 19, 2011

“[T]his decade’s best food programming has plied our species’ basic need for sustenance with our culture’s love of competition and thirst for voyeurism into shows that are suspenseful, hilarious, challenging, maddening, and stomach-rumble-inducing—often all at once. . . we find ourselves passionately invested in food we can’t even taste.” — Paste Magazine

“Kind of neat to see what makes these chefs tick and their take on areas other than food.” — Comment on “Serious Eats” website regarding the possibility of an HBO food show.

In one way at least I’m like a shark, maybe a small school shark: I’m as attracted to American cultural psychosis as a shark is to blood or smelly bait and chum in the water.
Once riveted on what I called “Autopsy TV,” I am now speechless before “Food TV,” quite honestly transfixed by the mélange of odd elements that comprise our fascination. By “Food TV” I am not just referring to the Food Network which presents 116 food shows from Ace of Cakes to Worst Cooks in America but also Man vs. Food, Bizarre Foods, No Reservations on the Travel Channel, Top Chef on Bravo, and the many local and regional food shows on PBS.
If your tastes are European, either by upbringing or travel, you question the American bold “innovative” transformation of European cuisine. You question a certain obliviousness when it comes to time honored European regional and even national differences. It irks you that French and Italian with a splash of Spain, Portugal, Greece, Lebanon, Jordan, Syria and Cyprus are all brought under the umbrella of “Mediterranean” cuisine. They are all fused and branded in the name of inventive change, as if you could take any number of Renaissance painters, blend all their canvases, flourish with a squeeze bottle squirt of mystery compote and voila! Pure American Genius!
Of course, the squeeze bottle has a potent, mysterious allure; its contents can glorify the Donner Kabob and West Virginia barbeque. It can colorfully lace the perimeter of a white plate in which a tweezer arranged creation rests distinctively in the middle.
American culinary genius recognizes no boundaries, except of plate, of ethnicity or tradition. The addition of Philadelphia brand cream cheese to an oil-based processed cheese produces –Voila!– the Cheese Ball, that ubiquitous delight of the American Heartland. Put aside Spanish Shiraz 8 per cent wine vinegar — and the whole magnificent tradition of creating great vinegar — and olive oil and grab a bottle of Ranch, comparable only to Coke in its pricey nothingness. Demand a meatball with your risotto, fry a whole turkey in an oil drum, stick chocolate bits in any recipe they never were, allow a machine to make your bread, throw away your pots and pans and “nuke” your food, and enjoy your choice of a boutique coffee which emits every aroma but that of perked coffee, that bygone scent of bygone early mornings in America.
But all this may be no more than Old World caviling which ignores America’s inventive spirit, its refusal to bow to any tradition, political or culinary. Here we invent what suits us and recognize no foreign claim to a superior quality of life, including food.
And yet there is a definite oddness, a certain derangement of logic, about a fast food culture lusting for grease, salt and sugar, a culture whose cooking skills begin and end with a microwave, a culture that no longer has time or skills to cooks creating this ever proliferating Food TV mania.
I mean why are Americans, who have given up cooking for “nuking,” who flock to fast food emporiums, who have less and less time to cook and to eat, who have been largely unconcerned with nutrition and healthy eating, who are not obese because they cook like Paul Bocuse ….why are they so fascinated by all these food TV shows? By competing cooks who are preparing dishes no viewer will ever make or ever have the opportunity to eat? What gives here?
The psychology behind all this is deranged but not impossible to follow. But we need to take a closer look at the derangement itself.
Here is a culture where the Few whom the Goddess Fortuna has blessed seek “an elegant hideaway whose conceits include the pairing of each dish in an 11-course meal with a lukewarm flavored water in a lidded grappa glass” while the Many whom the Goddess has tied to wages seek . .. well, grease, salt and sugar, a “Happy Meal” in an eatery with colorful plastic conceits.
In our strange Food TV world we have zany extrapolations of the basic food groups, over-the-top fusions of what should never be fused, rather like the fusion of Jeff Goldberg and a fly in a re-make of the classic The Fly, a stupefying mission to “contemporize” classic dishes and “de-nationalize” and “de-regionalize” cuisines in deference to the new drive to personalize and self-design every little bit of everything in the world.
You can’t leave the classic pizza margherita alone; you need to add a pineapple. What American cares if Italians think peperone means sweet pepper and not sausage? And what kind of sausage is this “pepperoni” with the name of a pepper? Any why after an endless proliferation of food TV can’t Americans break away from dried grain dregs coated in sugar called “breakfast cereals”? And now how insane is it that the meat and poultry of the past, uncontaminated by our chemical industry, now is rediscovered in gourmet food stores and sold at prices only the plutocrats can afford? “Designer” food supplies which are free of preserving chemicals, high fructose corn syrup and spray baths of fungicides and pesticides are now sold on website for a discerning top 20 per cent, whose life span increases while those who may reach Social Security age are destined by diet to need Medicare. The increasing need for both these government programs is running neck and neck with a need by plutocrats to undermine both programs.
The question now arises: Has anyone ever claimed that “American Exceptionalism” extended to American cuisine; what have we done beyond our technologizing of food production?
I need to roam around, try, in Montaigne’s fashion, to see what is going on here. I make no argument but like an analyst probing the analysand, I am in search of the conditions and characteristics of something strange, a certain curious arrangement of world and desire, a fascinating projection of obsession and yearning upon a basic human need: the need to eat.
To be continued….